His Divine Grace A.C. Bhaktivedanta Swami Prabhupada, founder-acarya of the International Society for Krishna Consciousness, was born in 1896, in Calcutta, in a Vaishnava family.

Srila Prabhupada wrote a commentary on the Bhagavad-gita and assisted the Gaudiya Matha in its work. In 1944, during the Second World War, when paper was scarce and people had little money to spend, Srila Prabhupada began a magazine called Back to Godhead. Single-handedly, he would write, edit, oversee the layout, proof-read and sell the copies himself. This magazine is still being published today. 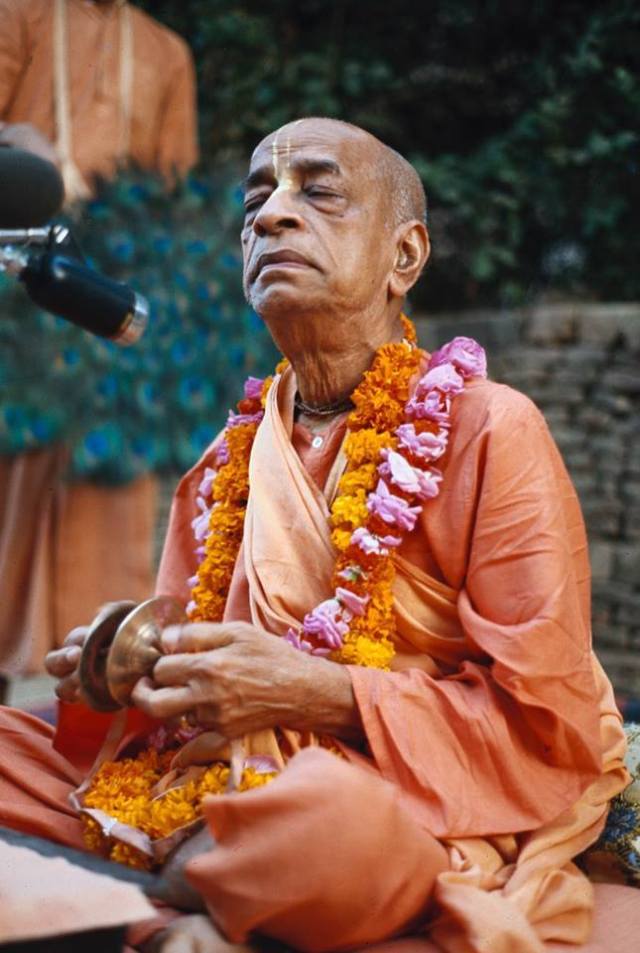 In 1950 Srila Prabhupada adopted the vanaprastha (retired) life; thus retiring from home and family life, in order to devote more time to his studies. In 1953 he received the title Bhaktivedanta from his Godbrothers. He travelled to Vrindavana, where he lived very humbly at the Radha-Damodara temple. He spent several years there studying the scriptures and writing.

In 1959 he took sannyasa, the renounced order of life. It was then, while staying at Radha-Damodara temple that he started on his masterpiece: translation and commentary of the Srimad-Bhagavatam in English. He also wrote Easy Journey to Other Planets. Within a few years, he had written three volumes of English translation and commentary for the first canto of Srimad-Bhagavatam. Once again, single handedly, he bought the paper and gathered funds, to print the books. He sold the books himself and through agents in the larger Indian cities.

He now felt ready to carry out his spiritual master’s orders and decided to start by taking the message of Krishna consciousness to America, convinced that other countries would follow suit. Obtaining free passage on a freight ship, called the Jaladuta he finally arrived in New York in 1965. He was 69 and practically penniless. All he possessed was a few copies of the Srimad-Bhagavatam and a few hundred rupees.

He had had a very difficult crossing, suffering two heart attacks and once arrived in New York he didn’t know which way to turn. After a difficult six months, preaching here and there, his few followers rented a storefront and apartment in Manhattan. Here, he would regularly give lectures, kirtana and distribute prasadam. People from all walks of life, including hippies, were drawn here; in search of that missing element from their lives and many became part of ‘Swamiji’s’ following.

As people became more serious, Srila Prabhupada’s followers used to hold regular kirtanas in the parks. The lectures and Sunday feast days became renowned. His young followers eventually took initiation from Srila Prabhupada, promising to follow the regulative principles and chant 16 rounds of the Hare Krishna mantra daily. He also reinstated the Back to Godhead magazine. 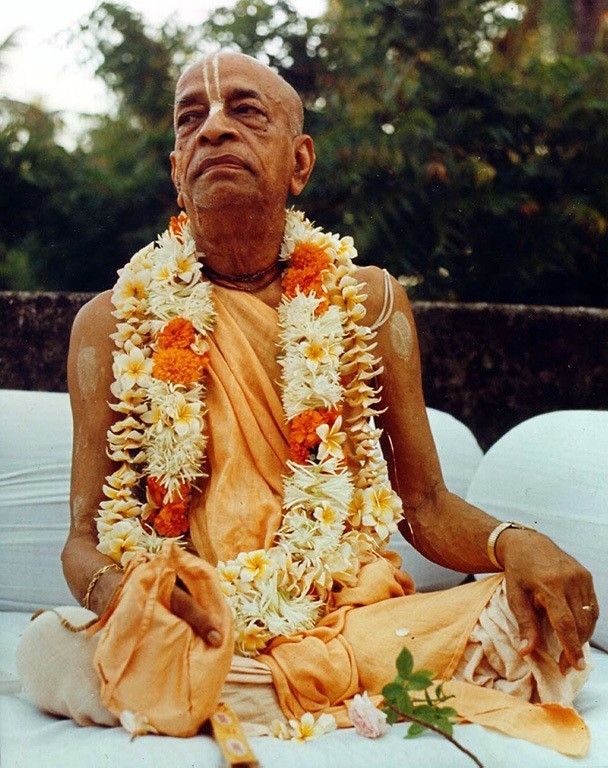 In July 1966, Srila Prabhupada established the International Society for Krishna Consciousness – ISKCON. His aim was to use the society to promote Krishna Consciousness throughout the world. In 1967, he visited San Francisco and started an ISKCON society there. He then sent his disciples all over the world to spread Caitanya Mahaprabhu’s message and open new centres in Montreal, Boston, London, Berlin, and other cities in North America, India, and Europe. In India, three magnificent temples were initially planned: Vrindavana, the Krishna Balaram temple with all its ancillary facilties; Bombay, a temple with an educational and cultural centre; and in Mayapur, a huge temple with a Vedic planetarium.

Srila Prabhupada produced all of his books bar the three written in India within the next eleven years. Srila Prabhupada slept little and would spend the early morning hours writing. He would write almost daily between 1:30 and 4:30 a.m. He dictated his text, which his disciples then typed and edited. Srila Prabhupada would translate the original texts from Sanskrit or Bengali, word by word, and gave a complete commentary.

His writings have been translated into over fifty languages. The Bhaktivedanta Book Trust, established in 1972 to publish the works of His Divine Grace, has thus become the world’s largest publisher of books in the field of Indian religion and philosophy.

Despite his heavy literary schedule, Srila Prabhupada did not let his writing stand in the way of his preaching. In just twelve years, despite his advanced age, he circled the globe fourteen times on lecture tours that took him to six continents.

His days were filled with writing, teaching his followers and the public, and with guiding his growing society, until the day he departed from this world. Before departing from this world Srila Prabhupada gave many instructions to his disciples to follow in his footsteps and to continue the preaching and spreading of Krishna Consciousness all over the world.

In the short time he spent in the West, he preached continuously, established 108 temples, wrote more than sixty volumes of transcendental literature, initiated five thousand disciples, founded the Bhaktivedanta Book Trust, began a scientific academy (the Bhaktivedanta Institute) and other trusts related to ISKCON.

Srila Prabhupada was an extraordinary author, teacher, and saint. He managed to spread Krishna Consciousness all over the world, through his writing and preaching. His writings comprise of many volumes and are the basis of Krishna consciousness not only for his disciples but for his grand-disciples, affiliated members of the disciplic succession, and for the public at large. 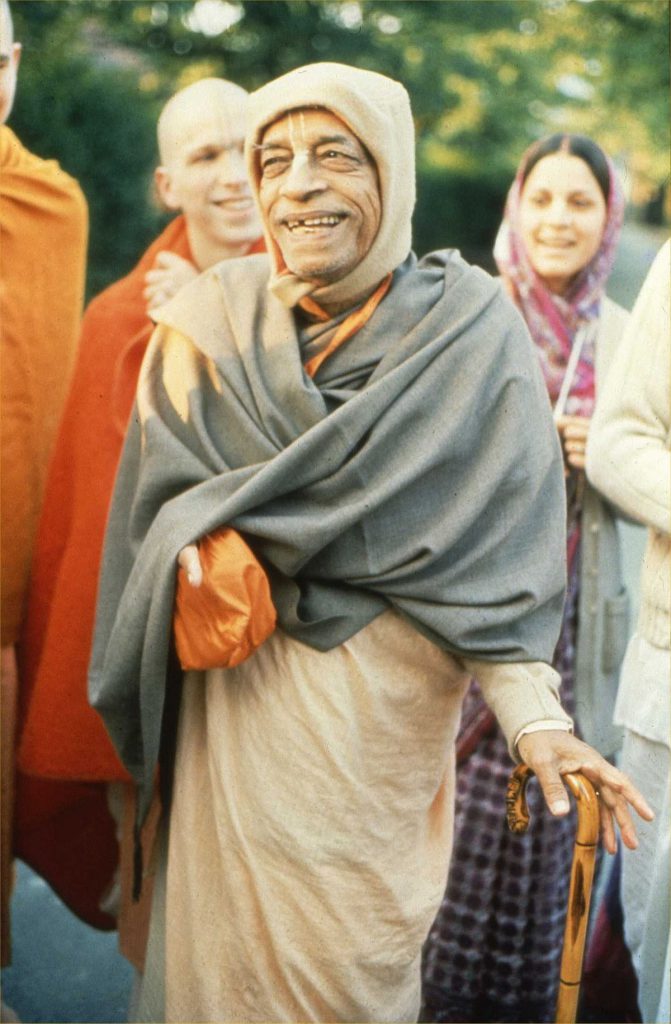